Saturday7th May 2022 – Our AGM at Canalside Conference Centre, Middlewich. This was our first AGM for 3 years, but we still managed to clear all the business side within an hour.

After the meeting we were taken on a guided tour of Murgatroyd’s Brine Pump. (Photos: Roger Evans)

– This AGM was postponed because of Covid-19.

– This AGM (and the tour of Murgatoyd’s Brine Pump) was postponed because of Covid-19.

Saturday 11th May 2019 – Our AGM at Etruria Industrial Museum. The Wedgwood Trophy was presented to Val & Peter Sibley for their “Towpath Reflections” articles which were published for many years in Grand Trunk.

After the meeting we were taken on a guided tour of Shirley’s Bone and Flint Mill. (Photos: David Clegg)

The museum isn’t open to the public yet, but Roger & Martin Fuller delighted in showing us around and even giving us rides on their train afterwards. (Photos: Roger Evans) 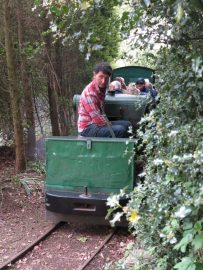 After the AGM Jon Honeysett took us on a very interesting guided walk to see both Harecastle Tunnel entrances and the railway station. (Photos: Roger Evans [except group at Tunnel: Sarah Honeysett] )

Saturday 14th May 2016 – Our AGM at Stone Station. The building was completed in 1849 by The North Staffordshire Railway Company (previous owners of our canal) and is a grade II listed building. It was refurbished for community use in 2003. (Photos: Roger Evans [except inside: David Clegg])

The meeting began with a short talk about Stone by David Dumbelton. Stone’s two major industries were brewing and shoe-making. The most famous brewery was Joules (pronounced Jowls). The town is attractive, socially active with beer and food festivals, and very much a canal town.

The Report on 2015 was then discussed. Highlights included :-

After the formal business (and an excellent buffet lunch) David Dumbelton led a guided walk along the towpath. For one member (John Tackley) this involved an emotional reunion with the cabin section of butty “Rebekah”, used as a flower display below Star Lock. This was originally the stern of John’s butty “Axe” which was discarded after the boat was sold and converted to power. (Photos: David Clegg [except Rebekah/Axe: Roger Evans])

After the formal business over 30 members had a tour of the site (even though it wasn’t yet open to the public). This tour was excellent, especially for those of us who remember the works in its last working days. Our two guides were apologetic that it was their very first tour, but they worked hard to explain everything to us, and to answer our questions. Afterwards we had an excellent buffet lunch to round off a very interesting day.

After the formal business all 17 members had a tour of the site by Visitor Manager Teresa Fox-Wells which was very interesting, especially the inside of the bottle kiln. We were particularly impressed by the way the site had been kept looking “old and weathered” rather than too much new work being done. The site formally opens on July 1st, so do visit it yourselves. A buffet lunch followed (our thanks to Cynthia Dumbelton), then a visit to the factory shop. (Photos: David Clegg [except Bottle Kiln: Bob Luscombe])

Finally David Dumbelton and Roger Savage led us on a walk along the line of the Burslem Arm, explaining their proposals and answering all our question. The weather co-operated, so we had a really enjoyable walk. (Photos: David Clegg)