There was a major breach near Dutton Hollow on Tuesday 25th September 2012. The canal was finally reopened on Friday 3rd May 2013. This page records the work as seen when our society was involved.

(All photos © Roger Evans, unless otherwise shown)
Clicking on any picture will show that picture larger

Tuesday 25th September 2012 – Following a period of heavy sustained rainfall in late September 2012 the Trent and Mersey Canal suffered a major breach at Dutton Hollow (near Bridge 213, south of Preston Brook), and also had to be closed for repair where significant damage was done to a supporting embankment at Croxton Flash near Middlewich. The initial rough estimate for the repair work was £1.5 million.

Friday 5th October 2012 – Visit by BBC & Granada Film Crews to the site of the breach. Luckily for us, the society was invited along to see the damage.

The film crews were allowed right down into the breach.

Thursday18th October 2012 – Anticipated reopening dates of Christmas for Croxton and Spring for Dutton.

Friday 2nd November 2012 – Work going well at Croxton with reopening date brought forward to “start of December”, but delays in getting permission for access to the site at Dutton Hollow had pushed the reopening date there back to “hopefully Easter”.

Tuesday 29th January 2013 – Preparatory work at Dutton Hollow completed, and repair work started. The estimated cost has now risen to £2.1 million and the reopening date been put back to “May”. 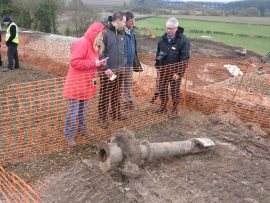 Tuesday 12th March 2013 – The society has agreed to restore the Milepost 90 which was moved and damaged by the breach. Here it is seen in happier days long before the breach, and then (as recovered from the  debris) on the Open Weekend. The old 2006 pictures are courtesy of Phil Myott’s interesting website about all the T&M milepost, which is now available on our website (click HERE to view it in a new tab).

Wednesday 18th April 2013 – C&RT announce “We are delighted that the repair work for the breach at Dutton is making excellent progress and we expect the major works to be completed by the end of April. After re-watering the section and making final checks the canal will reopen to navigation on Friday 3rd May, in time for the Bank Holiday weekend”.

Sadly, the very interesting Canal & River Trust’s “Diary of a Breach” Blog (usually weekly updates on how the repairs proceeded) is no longer available online. In case you want to try and track down the blog on the Web Archive, the web address was
http://canalrivertrust.org.uk/news-and-views/features/diary-of-a-breach