This is a replacement milepost, unveiled in 1982 by Mike Mitchell. He was the original treasurer of our society and later became chairman. 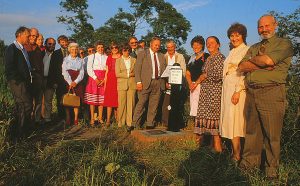 Mike is next to the milepost wearing a brown suit

Here are the post and both plaques, photographed in 2021.

The plain plaque, which was added later, reads :

Page last updated October 2021
(All photos © Waterway Images, unless otherwise shown)
Clicking on any picture will show that picture larger