This is a replacement milepost, unveiled in 1980. However, 40 years later in 2020 we discovered that the original milepost had been found in storage at the National Waterways Museum at Ellesmere Port. [Unfortunately their records don’t say where (or when) the milepost was found, so we don’t know why we had a replacement milepost cast instead of just replanting the original milepost. Steve Guest thinks he remembers hearing that the original milepost was found on the old line of the canal (which had been bypassed in the 1950’s because of salt subsidence) after the new one had been planted. Can anybody confirm or deny this?]

The top of the original post is in good condition (apart from a deep gouge). The maker’s plate looks like it was badly worn, as it has been repainted to read “RUD S’COND 1819” instead of the correct “R&D STONE 1819”. (photos © Norman Stainthorp).

Here is the replacement post being unveiled. [This photo is from the TMCS Archive, and unfortunately the photographer is not known. Cana anybody help?] 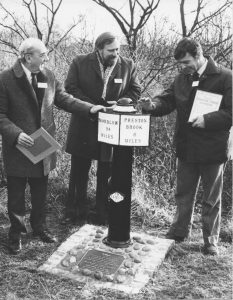 Page last updated April 2021
(All photos © Roger Evans, unless otherwise shown)
Clicking on any picture will show that picture larger