Unusually, this milepost isn’t visible from the canal as the junction with the Bridgewater canal is just inside the tunnel. The milepost is beside the horse-path over the tunnel (nowadays a minor road) and it is on the roadside around 10 yards from the tunnel entrance.

[I seem to recall being told that the tunnel was extended when the Bridgewater Canal decided to build a tunnel-keepers house (now long demolished). They extended the tunnel (technically as a bridge across the Bridgewater Canal?) and built their  house on the extension. The Keckwick Brook, and the horse-path also cross on this extension. Old photographs of the house always show the windows over the tunnel entrance as having been bricked up, which is assumed to have happened once the steam tugs started work. Can anybody confirm this information (or correct me)?

Update August 2020 – According to the March/April 2005 edition of our magazine Grand Trunk, a second possible reason for the extension was so that the Keckwick Brook could be diverted across the canal, instead of it being allowed to enter the canal by the tunnel mouth. Both Colin Edmonsdon and Tony Lewery (who lived in a canal-side cottage) supported this second reason. Apparently a relatively recent (in 2005) experiment in diverting the stream into the canal had to be abandoned when it blocked the canal with silt after just 2 days.

Update August 2021 –  Ray Shill has located several maps, dating as far back as 1785 that show the tunnel mouth in the same location as now. Hence it seems that the tunnel has never been extended and the milepost was always on top of the tunnel, rather than at the mouth).]

Here is our most northerly milepost disappearing slowly into the road-side hedge in April 2015. 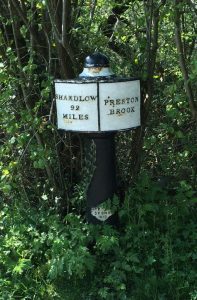 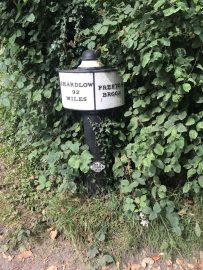