We soon became involved with the reinstatement of the Horninglow basin wharf side crane which was made by JS.Lee & Co Earlestown Lancashire for The North Staffordshire Railway Company. This crane had been saved a number of years earlier from the fate of the Scrap man by Harry Arnold, Roger Lee and other Society members back in 1976-1977 when the North Staffordshire Railway warehouse was demolished for road widening, with the hope of reinstated it somewhere else. 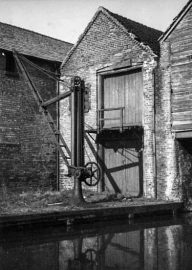 It was agreed with British Waterways Board that the crane could be reinstated at Fradley Maintenance Yard in front of the original remains of the canal wharf side that was once there. One of my first work parties on it was tightening down the base plate; unfortunately I do not have any photos in my photo archives of the stem post going back up.

Once the stem post was back up it was hoped that the rest of the crane would be reassembled. But due to ongoing society work with the milepost campaign and other projects the crane parts were moved into storage around the back of the maintenance yard this is where it stayed for most of the 80’s. Till one Sunday work party in 1989 when working on narrow boat “Kangaroo”, Waterways were having one of their infamous clear outs of unwanted items. It was quickly agreed to look for the crane parts and after spending a morning clearing  brambles and cutting back under growth the remains of the crane were dragged out and laid out to see if it could be put back together. Unfortunately it was found that the top collar which fits on to the stem post had gone missing. After looking at the few old photos that existed of the crane it was decided to get a new top collar made this was manufactured by a local boat builder. So when you next pass Fradley Maintenance Yard look up to see if you can spot the only bit that is not original. 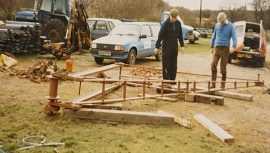 Crane parts after being laid out with the missing top collar

After the top collar was completed a date was fixed for a work party weekend to lift and assemble the crane. This was completed by Society members plus help from members of the Ash Tree Boat club and Erewash Canal Preservation society who were at Fradley and gave up their time to assist. The crane was lifted back on by manpower and using a block and tackle; not something that would be easy to get done today with all the risk assessments and method statements that CRT require today!

Note that the lifting chain, top pulley which we could not fit due to the new top collar and lifting hook were not put back on to make sure the crane could never be used. These were reused in the restoration of another T&M wharf side crane which the society undertook.

The official unveiling of the crane took place on 30th September 1990 with a small boat gathering of member’s boats and night time BBQ in what is now the Laughing Duck Café.

The Plaque at the base of the crane