Our story with the Shardlow Crane starts in 1989 when we used to moor our first boat “Alzark No1″ in Dobson’s Basin. We used to overlook the crane and at this time it was looking in a much unloved state. My father made enquiries with the then British Waterways Board to see if we could paint this up as a work party project for the canal society. Waterways said that they did not own the canal crane and had no idea at the time who was responsible for it. After making contact with the warehouse owners at the time, they put us in touch with Jeff Clifton. Jeff said that the crane was originally owned by F.E. Stevens Ltd until they went into liquidation. This was around the time when Shardlow was being declared a conservation area. Jeff said that they had a canal side meeting with Bernard De Stevens and it was agreed that he would take custodianship of it to ensure that it stayed on site in Shardlow. This was around 1974. He was only too pleased that the society wished to tidy it up and gave us his full backing. 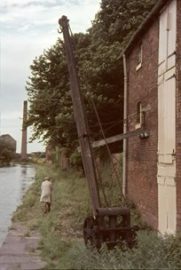 The Shardlow crane was erected on site in 1870 for use by Zachariah Smith who had a  brewery bottling store in the adjacent canal arm. It is believed that the crane was made in Birmingham By JW Youngs who had their premises on Ryland Street.

One of the first work parties on it was clearing back the undergrowth to reveal the sandstone slabs. Over a number of weekend work parties the crane was repainted and some repairs carried out to the middle section of the wooden jib that was suffering from wet rot, It was agreed at the time that this did not comprise a safety hazard. Unfortunately I do not have in my photo archives any photos of the work parties or the official unveiling of the plaque. 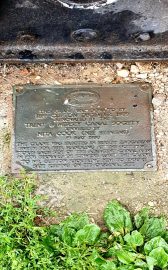 Over the years the society carried out routine work party inspections on all the cranes under their custodianship. In 2005 it was found that the Shardlow one, as well as needing a repaint, now required a little bit more work! A structural crack had developed in the towpath canal side cast iron casting due to frost damage and the middle section of the wooden jib was now at risk of structural failure. After talks with British Waterways it was decided that the wooden jib would be removed with a view to replacing and, if possible, the cast iron side would be removed for repair to the crack.

When we dismantled the jib we found that we could shove a screwdriver straight through the rotten section (just below the lower person in the photograph). Due to the bolts holding the crane together having not been undone since we think in the 1930s (when it was thought that the jib was replaced), we had to spend a number of Sunday mornings coating them with a mixture of easing oil and diesel and using a lot of heat via a gas touch to get them to move. Once free the tie bars were removed and the jib lowered to the ground which surprisingly went without any problems. When we came to cut off the top collar the wood in there was as good as the day that it was put up.

The damaged casting side was loaded on to my dad’s boat “Alzark no2” for transportation to  Mick Clamps (the Blacksmith based on the top of Snarestone Tunnel on the Moira Cut) for repairs. I remember the job we had taking it from the towpath up the old horse path to Mick’s place on a hand truck, Alzarks cabin top still had the small dent in from this little carrying trip. The return journey for the casting when fixed was by van.

By the time the side castings were put back together, my father’s battle with cancer had taken a turn for the worst and the crane jib replacement project was taken on by Waterway Recovery Group and members of the Erewash Canal Preservation Society under the leader ship of John Bayllis. A jib was sourced and purchased. This was transported to site by the historic narrow boat Bath. When the jib was reattached it was found that the jib was slightly longer than the original one so the two tie bars required extending. This was completed by the fitting of two plates on each of the bars. The official unveiling of the repairs took place on the 24th October 2014. 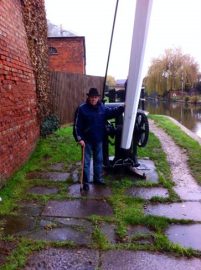 Alan did get to see it back up on his last visit to Shardlow. November 2014