This is a replacement milepost unveiled by the Earl of Shrewsbury in 1982. As reported in the July/August 1982 edition of “Grand Trunk”, the people standing around the milepost are (left-right) The Earl of Shrewsbury and Waterford, Laurence Sanders (our President at that time), The Mayor of Stafford, Captain Bill McKelvey (Director of  the Canal Society of New Jersey) and Harry Arnold (our then Chairman). (Photo © Chris Edge)

The colour photograph below seems to feature the same people, but the clothes have changed, so presumably it was taken later .
[Was it a few days later or several years –  Anybody know?] 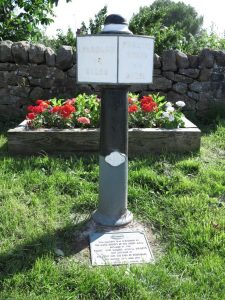 The plaque indicates that the sponsorship (unusually) came from abroad. The Canal Society of New Jersey is a very long-standing Life-member of our society. 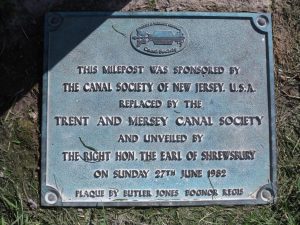 Finally, in September 2020 the milepost was resplendent (apart from a spattering of grass cuttings) with the lettering picked out in black and the lower part of the post returned to black. 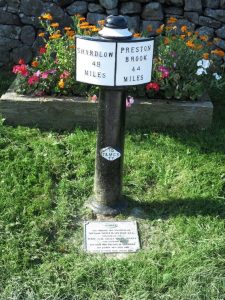