This is a replacement post, and warranted a big ceremony as it was the last post to be replaced (Historic photos © Waterway Images).

Here is the milepost in 2020. A closer view shows that the plaque is missing

View of the milepost and adjacent Bridge 129C (and our boat!) 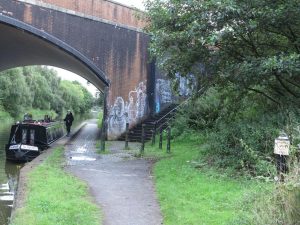 Comparing the historic and 2020 photographs, it is noticeable that the plinth has been modified since it was originally built (e.g. there are a different number of bricks along the front edge). As part of this rebuilding the plaque was installed ABOVE the level of the plinth rather than set into the plinth, so it would have been relatively easy to lever it off! By looking at the photographs taken by Phil Myott in 2003, it looks like the plinth had been modified by then, but the plaque was still present. To see Phil’s pictures (in a new tab) click HERE  and then click on any picture to enlarge it. Does anybody know when and why the Plinth was rebuilt? [Our guess is that it happened when the bridge was built. Maybe they had to move the milepost?] 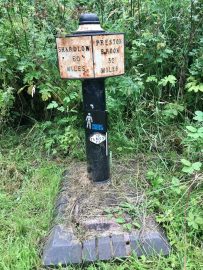 Page last updated August 2021
(All photos © Roger Evans, unless otherwise shown)
Clicking on any picture will show that picture larger