This is a replacement milepost, sponsored by Christopher Skelhorne (Chairman of the Stoke-on-Trent branch of the IWA) and his family, also by David and Alison Clarke and family . It was unveiled by Brian Haskins (Northwich Area Engineer, BWB) on Sunday 30th October 1983. 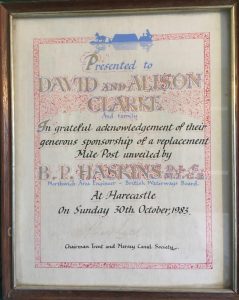 Unusually, this milepost is NOT at its original location, which is why the lettering is painted over (as the mileages are therefore wrong by around half a mile). The original milepost was sited on the horse path above the tunnel, a location no longer available, as this plaque explains. There are two other plaques here. The first commemorates the re-enactment on 3rd July 1966 of the cutting of the first sod (which took place nearby on 26th July 1766). The final plaque is a much more recent Transport Trust Plaque on a nearby building. Three more pictures. First the Milepost and 3 of the plaques