The Society became interested in the restoration of the Swarkestone crane (which at the time was just a rusty mess) when, during a conversation with members from Swarkestone Boat Club, it was rumoured that British Waterways Board still had the tie bar supports and top jib casting in storage in the canal side warehouse. These parts had been stored there when the jib was removed from the wharf side crane by the toll house were the canal used to branch off to drop down to join the River Trent. Permission was sought from BWB to look to see if the parts were still there. When we got to look inside the warehouse BWB at the time were using it to store all sorts of canal bits. After looking under old stop planks and paddles of all sizes the tie bars and top casting were still there luckily and had not gone for scrap. Very quickly a plan was put together to see if the society could reinstate the jib. 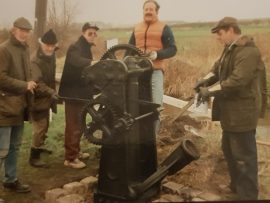 We were very lucky with this crane as the original plans for it are still in existence. These were tracked down by Geoff Williamson to the waterways archives which at the time were at Gloucester Docks. From these we found out the height and dimensions of the wooden jib. I have a copy of these on my wall in my boatman’s cabin on England. 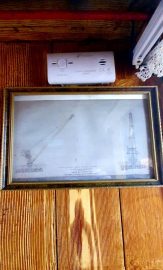 Copy of the original drawings on my boat

An 18 foot length of pitch pine was ordered from a timber merchant in Derby for the jib. BWB kindly let us use and store this in their warehouse at Swarkestone. A few weekends were spent shaping the ends and sides of this the old fashioned way, with the adze so it would fit and look right. When we reassembled the crane jib and tie bars, we reused the pulley wheel from the Horninglow crane which we could not refit there, and a hook and lifting chain from Donisthorpe Colliery to replace some of the missing items.