Milepost 58 / 34 is opposite the Burslem Arm

This is a replacement milepost (seen here in 2020 hiding behind vegetation). 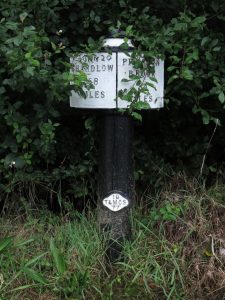 After a quick clean it looked better

Unfortunately the plaque couldn’t be found,
despite digging a hole in front of the post. 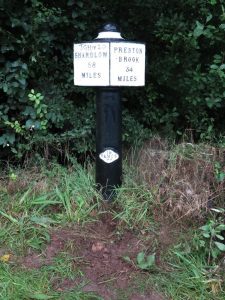 Comparing these photographs to those taken by Phil Myott in 2003, it looks like the plaque would be further underground than we excavated (assuming that it is still present). To see Phil’s pictures (in a new tab) click HERE  and then click on any picture to enlarge it. Does anybody know when and why the plaque was buried? [Our guess is that it happened when the cycle path was built]

THIS MILEPOST WAS SPONSORED
BY MAJOR AND MRS I.J. BOND OF N.B. MARQUIS
IN MEMORY OF THEIR SON TIM
REPLACED BY THE
TRENT AND MERSEY CANAL SOCIETY
AND UNVEILED BY JANE AND SIMON BOND
ON SATURDAY 3RD AUGUST 1985